So I wrote a new one. Wrote it backwards and stapled it to my forehead so I’d remember to use it every time I looked in a mirror. Makes shaving hard. One time I daydreamed a little and wrote a haiku about writing in my cheek stubble. It wasn’t very good, but maybe it’ll get better as I let my beard grow.

I can only assume my old list is now lost in that space between worlds where car keys and glasses always flee to.

Or it’s lining some rat’s nest. And I’m not talkin’ about the clever synonym for messy either. I’m talkin’ an actual nest where a rat lives. A rat who’s always telling his friends that, when he finds the time, he’s gonna write a book. Someday. Or a blog.

Rats can be so indecisive.

I can see the little rat wannabe author right now staring at my list and wishing he—or she, rats can be girls, too—was a writer in my genre and not strictly a romance rat. But he decides to give it the old rat-school try.

How hard can it be, right?

He sits, staring at his little rat computer, watching the cursor blink.

And … you get the picture. Anyway. Ricky hates the ugly, stupid, two-sandwich-eating cursor that blinks there, mocking him. Like the kids did on the playground while he waited his turn to run in the little wheel. All because his parents named him Ricky. Seriously, how would you like it if your name was Ricky Rat? And is it weird that all the rats in the world have Rat as their last name?

Or is it just me?

So, poorly named Ricky sits in front of his frustrating computer, feeling depressed about being picked on so much, waiting for inspiration so he can crank out a book from one of the awesome ideas he stole from me.

Not to go all “English Class” on you, but writing is an active verb, whereas waiting is a passive verb. If you wait until you feel inspired to write, like Ricky did, you and the blinking cursor will start dating, get married, and raise a brood of little blinkers before you ever see anything that even vaguely resembles a book.

Writing is work. And you do it whether you’re inspired or not.

Or it doesn’t get done at all. 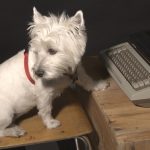 I Have No Idea What to WriteUncategorized 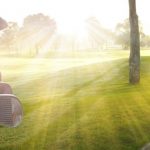 Golf: A Game about Making ExcusesUncategorized