The End Is Nigh

It’s the last part of every story. Of every movie. Of every book. The part where you’re supposed to go, “I can’t wait to read his/her next one.”

Supposed to being the key phrase here. Because if you’ve read more than one or two books in your life, you’ve probably been pissed off by an ending. I know I have. In fact, there has been the occasional book I’ve gotten to the end of and thrown across the room.

There’s the rub—if a book makes you that mad, it means you got caught up in the characters and the story (which is what every author wants a reader to do) so hard you take the ending personally. You hate the writer (which no authors want) because of what they did to the characters and, by extension, you.

They don’t get together when they should have. The bad guy isn’t defeated. The main character (who the cool writers call the MC—not Hammer) leaves the restaurant too early and never does meet the love of his or her life.

“No!” I scream, channeling the angry souls of a thousand dissatisfied readers in the same way that the Grinch’s heart grew when he learned the true meaning of Christmas.

I honestly don’t know if that was a digression or just a mangled metaphor that’s gonna bring the police to my door to arrest me for language abuse.

The point is—a bad ending can wreck a great book.

As a writer, that’s a lot of pressure. Good endings are hard. There are so many questions you have to answer. Do you have a happy ending or a sad one? Or something in between? I write stuff with some darkness in it, but does that mean I have to provide redemption? Is that truly satisfying, or is it cheating?

Okay, fine—let’s go bittersweet. Moving on to the Double Jeopardy round.

Do you resolve everything at the end? If so, does that make you shallow? And will your readers be shallow as well? If not, what do you resolve and what do you leave unresolved? And are you sure that’s the right choice?

Assuming you brave the gauntlet of resolution and live, you don’t get to move on to Final Jeopardy. Way too easy. You go on to Triple. Then Quadruple. Then Quintuple. Because the questions don’t stop, many times not even after the book does—second guessing is the gift that keeps on giving.

Was I too abrupt? Did I drag it out like the third movie in the Lord of the Rings trilogy, where the movie ended so many times I wanted to punch Peter Jackson and J.R.R. Tolkien? The quest for the right ending often feels like trying to reach that place on the horizon where the earth touches the sky—you can see the sucker, but you can never get there.

Are you still reading? This isn’t like a Marvel movie where there’s an extra ending after the credits. Seriously? The blog’s over, and you’re still in the theater. Oh wait. I guess technically this paragraph qualifies as the extra ending.

This blog has become Return of the King.

Jeopardy, Lord of the Rings, reading, the end, writing

Why YA Author Tom HooverUncategorized 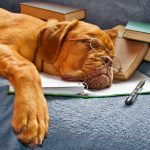