Tonight was one of those nights. The bane of every writer’s existence. I had a book to finish, an excerpt to read and comment on for a friend, a blog I desperately didn’t want to write, and the kind of hunger that leads to indecision.

Everything and nothing sounded good. The best sounding paces were far away and I didn’t want to make the drive, or the drive home. I basically wanted to be there with food in front of me and then somehow be home in bed.

The kind of night when you lament the fact that Star Trek isn’t real. Scotty could’ve beamed me to that restaurant. Stupid Gene Roddenberry disappointing me yet again. It’s enough to make you talk like Captain Kirk, with a series of ridiculously ill-timed pauses.

So I went to a close place. Not the place I wanted to go. But a place close enough that I didn’t care that it wasn’t what I really wanted to eat.

Dammit Jim, it was food.

I got there at happy hour, and the first thing I noticed was that nobody was happy. Not the patrons. Not the server. Not the bartender. People sneered when they drove by.

My dinner was going to be a tragedy of Lemony Snicket proportions, filled with cold appetizers and too-clever puns. But not an orphan in sight…except for me.

I was a poor man’s Oliver Twist.

And how sad is it to be a poor man’s Dickens character of any stripe? A poor man’s poor man, the mobius strip of literary characters.

Can I get an Amen? Or at the very least another Dammit, Jim?

Seriously, this feels like one of those weird Star Trek worlds. Where our planet devolved to the point where Dickens wrote about rich people drinking Cristal and wearing bling. His wife was Snooki Dickens and he came from the Jersey Shore. And Bones somehow fell in love with her after going back in time to become his own grandfather like that idiot tongue-twister of a song my cousin used to sing.

Surprisingly, he sang it most often when he watched Star Trek.

Freakin’ Gene Roddenberry mocks me from his space ship. Actually, from his space capsule, where his ashes and Timothy Leary’s ashes hurtle through space. Boldly going where no man has gone before.

Yes. I get the fact that they’re dead but, like Christmas, it’s the thought that counts.

Where I come from, we call days like these Tuesday. 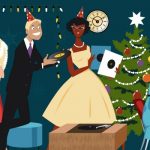