I don’t know if that’s the best way to start this blog. It was between that and “Don’t believe everything you see on TV.” Maybe that would’ve been better, but who really knows.

This is my third and final blog about timing, and I apologize that it’s been a long time coming. Who knew that writing about a personally disappointing experience would coincide with my day job exploding into an avalanche of relentlessness? Because, y’know, who wouldn’t want to drag something painful around for months?

Okay. Bitter digression aside, in the movies and on TV when they have a writer character, this person struggles with a variety of calamities that the average man or woman on the street believes is part of the writing life. Writer’s block (which I believe is fiction anyway), deadlines that creep toward you relentlessly like the undead or that one guy at work, and, my least favorite ***The Writer is Finally Discovered/Published***.

Cue the fanfare. The trumpets. The huge shovels full of BS.

If I sell a novel today, two years from now, you’ll probably be able to buy it on Amazon. I say probably because it might take longer. It might happen faster, too, but a year-and-a-half to two years is a pretty fair average for your first book. Subsequent ones typically do happen faster.

In terms of timing, that usually means that what’s popular today won’t sell because the industry has to project two years out. The first-time author books that are popular today were written two or three years ago when they “weren’t popular” but were a really good idea whose time was coming.

Fast forward to today … it came.

About three years ago, I wrote a book because my agent thought it would be the perfect thing for Disney. They came this close to buying my first book, but I told that part of the story last time. This book was a modern, dark, reimagining of the Aladdin story, with a different take on genies and wishes and an undead monster as the big bad.

I ended up writing the book twice. The first time around, I had some issues, and we (my agent and I agreed) decided a rewrite was in order. I finished it right before all the heart surgery hoopla happened, and when I was ready to rock-n-roll again, my agent and I parted ways (again, mutual).

So I made a few tweaks, rewrote the beginning, and started querying my version of Aladdin, trolling for a new agent. Unfortunately, at the same time, Disney was teasing and eventually releasing its new Aladdin. And it became very popular. Popular enough that I’m no longer querying it. Because it may not be such a big thing two years from now.

Chalk it up to timing. 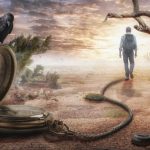 There Are No Atheists in the Query TrenchesUncategorized