The people who raised me didn’t do a great job preparing me for the life I was to lead. Or is it am leading? Would have led?

Let’s just agree that I wasn’t ready, and it’s their fault.

And when I say their, I’m not just talking about my parents, though they had a hand in it. There were also teachers, aunts, neighbors, grandparents, and the occasional authority figure—all of whom had hands in my ill preparedness.

Dammit! They’re all to blame for this mess I’m in.

Why? You might ask.  I’ll tell you, and not just to pad this blog. The future they inscribed on my small impressionable mind was very different from the one I find myself in today.

Here’s a for instance: Both my grandmother and my first grade teacher, Sister Something—the woman didn’t even prepare me for remembering her name to include in a blog one day. Seriously, I can name every one of my teachers except for her. But I digress—those two women taught me not to be like everybody else. To never apologize for being myself.

To be proud of my individuality.

My first job blew that right out of the water. I remember telling my boss: “I don’t think that’s what that machine is supposed to do.”

To which he answered, “I’m not paying you to think. Just shut up and do what I told you to do.”

You’ll notice, as I did, that he seemed to have very little regard for my individuality, my unique contributions to life, or anything else Gramma and the anonymous nun told me I should be proud of. They meant nothing to this man. And when I tried to explain, he told me to turn in my apron and get out of his face. That a thousand other kids just like me were waiting in line to wash his dishes.

So much for my uniqueness.

In retrospect, I should have just broken his stupid machine like he wanted—though that probably wouldn’t have gone my way either. What a jerk.

Years later, a better-dressed jerk said basically the same thing to me, only this time, it was turning in my keys to the building and getting my butt down to the unemployment office.

No wonder I can’t remember that nun’s name—she’s obviously hiding on purpose.

I wonder if she and my grandmother were in it together.

As it turned out, being an individual was only one of the many lies. Here’s a few more lessons I’ve learned:

And while it is true that sticks and stones can indeed break my bones, names can hurt, too. They can get you fired by a well-dressed jerk who lied about you to the big boss because he sucked at his job and needed a scapegoat.

I wonder if he was somehow related to that nun… 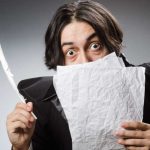 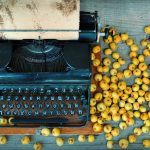 Novel vs. Blog: A StudyUncategorized